Showing posts from January, 2013
Show all

Now granted it's a best seller in the free program right now - but giving away something for free isn't overrated. Crack dealers do it all the time. And, word will spread and they will come ...

If you're a kindle prime user - go be one of the thousands that have downloaded it this week!  Here's a link for your convenience. 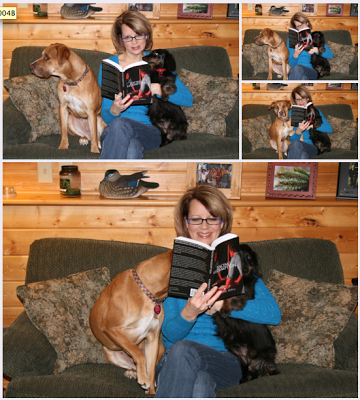 Of all the reviews, Facing Redemption has received to date, this one is the most heartfelt yet. It even comes with some special pictures, of some of my favorite readers ... my favorite blogger friend, Terri Terri, and my new for legged fans, as seen in the photo below.
Terri is a wonderfully creative person, whose heart is always in what she writes.  And, one of these days, I know she'll write a book of her own.

To prove my point, she could have just written a nice review of the book and left it at that. No ... being the awesome girl that she is ... she delved deeper and blogged about our friendship and blogging history.


She's a sincere and quirky young lady, who you need to be reading.  Go read her blog and you'll see what I mean.


And go read her review of Facing Redemption to see what she really thought.


Thank you, Terri, for being my friend, supporter, and favorite literary critic!!

- January 25, 2013
As a parent, I try to be proactive with certain conversations, like sex, as my child is getting older. I'd rather him hear from his father and myself than at recess, from his peers, like I did (at a much younger age than he is).

Sex is something that can and will be skewed by his peers' perceptions, based on how it was told to them (by their parents or a peer) and by what they see in the media. There are a whole lot of confusing messages out there, and I don't want my kid lost in the shuffle. However, that being said ... I don't want to bring something up that he's not prepared for either. Treading lightly is a good thing, as I introduce the subject. That may not be every parent's perspective ... but it's mine.

Every child needs to have the talk, but each child is so different and when they're ready for the talk will vary on their social circumstances and their mental capacity to understand.

Last week, we were sitting at church with another family.…
2 comments
Read more

- January 04, 2013
I've not been posting a lot - as a lot has been going on that has kept me from the computer. And to be quite honest, my computer isn't really up to date, so I use my phone a lot more than my keyboard. With iPhones auto-type issues ... let's just say I'm not completely comfortable letting my fingers type a blog from my phone.

Since I had a few minutes today, I wanted to share something that I hope will evoke something meaningful for you. Recently, a few doors have been closed on me ... doors I've been knocking on for a while and a few new ones. But to top it all off, a large project I've been working on is just taking a lot longer than I'd hoped for. Every time I think we're moving forward, we've taken two steps back.

And, it's left me feeling like ... well, Ummm - like that live-in girlfriend, who wants to get married, but is told 'why marry when you get the milk for free?'