Showing posts from November, 2010
Show all

- November 13, 2010
If I were a dude, today would have been heaven ... minus the 30 to 40 degree temperatures. Early this morning, we met two bikini-clad models at the lake to shoot months, January and July, for the new KRXO Classic Rock calendar.  The models were troopers.  I know if I was freezing my butt off in thermal underwear and sweats, they had to have been frigid with next to nothing on with winds whipping off the water at the lake. Lake Overholser, affectionately nicknamed 'Lake Holdercloser' in my college days, was the perfect location.  No one was out there and we had the entire lake to ourselves.  Other than an occasional looker and one police officer that had to stop by to 'inspect' the shoot, we were totally alone. And I fell in love with the two motorboats we went out on.  One of the high-end local dealers provided two amazing Mastercraft boats with every bell and whistle.  I hadn't been out in one in a very long time, and now I know why I had so much fun way bac
3 comments
Read more 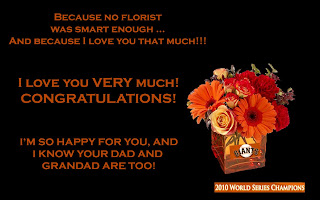 Imagine my surprise when I called 1-800 flowers today and not only did they not have ANYTHING to cater to sports fans, but the operator I was connected to had no clue what I was talking about. I asked him if he had anything to celebrate the Giants winning the World Series .   His response? "Um, we have nothing to do with giants, ma'am.  I can't help you." "No, not Giants.  The San Francisco Giants.  You know?  Do you know who won the world series last night?" "Um.  Sorry we can't help you." I was in shock that a salesperson for a major organization didn't at least say, "Hey I don't follow sports, so I'm sorry I really don't know what you're talking about."  Or, "Our company doesn't have anything for any major sports occasion..." On top of that, I was surprised he didn't start asking questions to dig deeper, because maybe if he'd asked what the teams colors were and realize
2 comments
Read more
More posts