Showing posts from August, 2011
Show all

Payoffs From My Doc

- August 31, 2011
Usually when your doctor calls you it's for one of three things: 1) You're due for your appt or missed it. 2) You owe them money. 3) The test results came back and it's not good. Even with the above list, I don't think I can ever remember my doctor(s) calling me on my cell in the last ten years.  Imagine my surprise when I get a voice mail from Sharon, my doctor's nurse, a few weeks ago.  I turned up the volume on my phone to make sure I took in every word of her message, because this had to be important stuff for them to initiate a call to me. Imagine my surprise - even bigger this time - in that her message was not medically related at all!  Now what in the world would Sharon or my fav doc need so desperately that they're trying to track me down? Well - they wanted books! And not just any book...mine. I laughed at her message which in short said 'that the copy of Finding Kylie I'd given doctor was in the patient waiting room, where many wom
2 comments
Read more 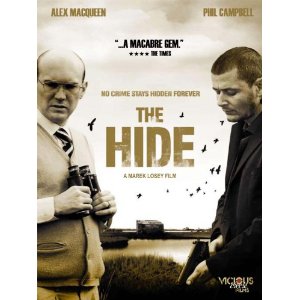 With movie production these days - one is easily entertained but most storylines don't make you think. The majority of popular flicks are just too easy to follow and predict.  In a small minority of the film industry, you find that rare treasure that gives you intrigue, tense on the edge of your seat entertainment, and a complete twist of what your perception of the film's plot is.  Going into most films, I already have the development, plot, climax, and ending usually mapped out in my mind - and for the most part, I'm right on target.  It's rare that a film not only surprises me but surpasses my expectations. The Hide  did just that! It is brilliantly written! I normally don't go for dark films.  It's just not my thing, although I've seen a handful and the ones that don't go too far over the edge for my liking. I have to say The Hide although promises to be dark, is so ingeniously written that you're too caught up in the storyline to notice.
Post a Comment
Read more

- August 06, 2011
It starts early... the pressure to be popular.  Lately, that's been the theme around my house. I cut my hair off shorter than my son would like and the response is: "Mom, you know I love you the most - but you've lost some popularity points with me until you grow that back." And today when I had to discipline him - I heard it again. Here's what I keep telling myself. I'm not trying to be his friend, like some of the parents in today's world.  You see I care about how my son turns out and if that means being the bad guy - then so be it. Today we worked on respect for his parents.  Lately, he's had a smart mouth on him which needs to be handled before he turns into one of those Disney teen characters on TV (which is why we don't watch those shows). After he'd been banned in his room for a short period and we'd had our talk about why he was punished, he crawled onto my back and hugged neck from behind.  He cuddled ever so sweetly an
4 comments
Read more
More posts