When my son was about three - I realized that my life had become central to just being a mom and a wife.  I looked around at my relationships and realized my best friends were my husband, mom, and my sister.

Don't get me wrong! Those are great best friends to have. They're all wonderful caring people who want the best for me. But ... sometimes a girl just needs a BFF who has no family ties.

It was then that I looked at my life and realized what a vast hole was within as I had no friend to call and just 'talk' or bond with.  I had plenty of casual friends, acquaintances, and really close long-distance friends, yet there was no one at the same stage in life that I could bond with.

I soon prayed and asked God to send me someone that was in the same boat as me - someone who needed a loyal friend and that would 'fit'.  That very next day, I sat next to a blue-eyed, blond, friendly face at my son's soccer game.  Although I knew who Susan was - because her son and mine played intermural toddler soccer together - I never had really been able to connect with her. 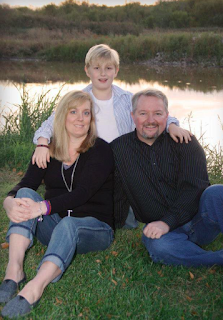 I'll never forget that first day we clicked on the sidelines and I realized that she was someone I could really enjoy spending time with.  I don't remember if we exchanged numbers.  I don't remember how we even started hanging out.  All I know is that we were so much alike and had so many of the same likes, flaws, personality quirks, and sense of humor that being a friend with her was as easy as breathing.  There was no pretense. Our friendship felt more like a sisterhood.  It didn't hurt that our sons were friends and our husbands were so much alike that they were often the source of our jokes.

Fast forward twelve years and I'm once again suffering from a deep hole in my heart.  My dear friend, Susan, has been gone for just over a month.  She was taken too soon and fought a very long battle with cancer.  And, I hate you, cancer ... I really do.  Even though it took her in the end, Susan still won because of all the lives she touched by being the toughest and most fierce warrior known to man.

Her bright shining smile and strong faith and zest for life left an impact on everyone she met.  Her laughter and fierce humor were magnetic to all of us that had the honor of knowing her. She would be the first person to point out any and all typos in this post, but would also be the first to tell me how much she loved what it said and how it made her feel.  She was my biggest fan and me, hers. 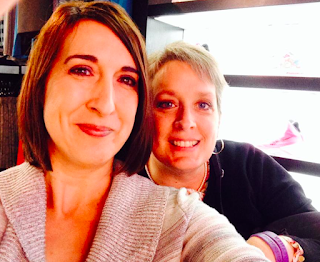 She fought terminal cancer for five years when the doctors said she had months.  She shined a light on how much God gave her and blessed her with when most would curl up in a corner and cry for the life they were losing.  She got up and went to work on days when her body was convulsing with sickness just to prove she could.  She pushed through to meet her friends for coffee ... to live life as a normal mom after carpool ... when her legs hurt so bad she didn't think she could put one foot in front of the other.

But that's who she was - a fighter.  No one or thing, like cancer, could define her.  She was undefinable, outside the box, unbeatable, and memorable person.  And if you'd spent one day with her - you'd know how blessed you were to have her in your life. 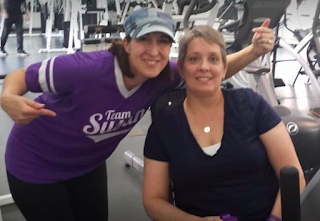 I said goodbye to my friend a few days before her passing when it was just the two of us.  Much like our first day on that sideline, we had our own language and spoke of things the two of us understood.  There was also just the girl talk that sometimes felt good just to focus on instead of the situation she was in.  She complimented me on my hair.  I ran my fingers through her short grey curly hair, that had changed from her normal long shiny blond locks of years ago and told her how happy I was that hers was growing back in.

She asked about my work ... I lamented that my full-time job kept me away from being there for her in many ways. I expressed this knowing she already understood.  We exchanged words telling each other how much we loved each other.

And when she apologized for dozing off - I smiled and told her to rest.  That's the kind of girl she was - always caring about the other person first.  It was no matter that she couldn't hold her eyes open because she was in her last few days of life - she felt bad that she couldn't pay me the attention she thought I deserved.  I told her not to be silly and to get rest - to sleep because we'd have time to catch up later.  Even though I knew we wouldn't.

Then, I kissed her on the cheek and told her 'I'll see you later.'  I couldn't say goodbye.  As a believer in God's promises, I know I will see her again.  That didn't make the walk to my car the hardest thing I've done... Walking away from her knowing it would be the last time I'd visit my bestie was so surreal filled with deep pain yet a thought still circled within of  - 'is this really happening?'

Now, I find myself pausing before I pick up the phone to call even though I know she's not there to answer. I catch myself almost texting her because something funny happened and I know she'd laugh. I have to stop myself from looking for her car in carpool because I can no longer hop in and visit. I went to lunch with a couple of our friends yesterday and it was good to catch up - but it wasn't the same without her. 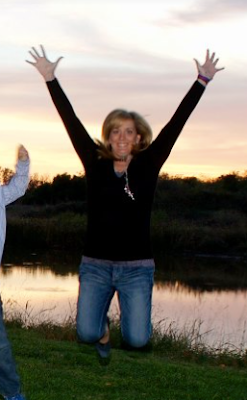 I picked up my Christmas gift from her today - a Jesus Calling devotional book. Her handwriting is beautifully displayed inside with touching words inscribed with care. Tears immediately came as I read them.

When this ever-clinging melancholy wraps around my heart like saran wrap would, I have to focus on the blessings to push forward.
I close with a note to my friend ...

Susan,  I miss you.  And, although, I can't pick up the phone and call you - I still feel like you're here. Although you can't talk back to me, I find myself speaking to you in a room when no one is around. And I know things on your side of things has different timing than where I am.  My time will seem like the blink of an eye - just like the Bible says - while you'll have waited a short time for your loved ones to join you. I meant it when I said, 'I'll see you soon'.  For me, it will take many many years - and since I have no idea what that looks like for you - I'll just keep doing things down here in your honor that would make you proud.

See you soon, my friend. You are missed!
#GodHasThis

It's amazing when my 5-year-old comes home, talking about the history behind MLK day. When I was in Kindergarten, we learned our colo...